WHAT IF ICE CATCHES ME?

I NEVER SHOWED UP FOR MY DEPORTATION HEARING.
WHAT IF ICE CATCHES ME?

Your failure to appear for a scheduled removal hearing most likely means that you were ordered removed in absentia by the Immigration Judge (IJ). That is to say, you were given a removal order for failing to appear and present evidence to the court on your behalf. When you fail to appear for a hearing, the IJ must issue a removal order, as long as the government has proof that you were given written notice of the hearing. So, if the government did, in fact, mail you notice of the hearing, you will be ordered removed if you fail to show up.

If ICE catches you, the agency can use that removal order to take you into custody and deport you from the U.S. without first giving you a hearing. By failing to appear for a scheduled hearing, you gave up your right to fight your deportation case. (That’s why it is ALWAYS better to attend a scheduled hearing in Immigration Court rather than simply not showing up – even if you are worried about the outcome.) Typically, not showing up for a scheduled hearing just because you are feeling under the weather is not a good enough excuse for failing to appear.

If you have a Removal Order in absentia, ICE can come looking for you. This is most likely if you are a “high priority” case because of a previous criminal conviction or history of immigration violations. If you are a low priority, ICE may never actively look for you, but you may come into ICE custody in some other way. For example, you may be arrested during a workplace raid or after being taken into custody by another law enforcement agency, such as by state or local police, following a criminal arrest or even a minor traffic violation.

If you are caught by ICE, you have the right to call a family member, friend, employer,
or lawyer. there are a few ways to avoid being deported, even after receiving an order of removal in absentia. For example, you may be able to file a Motion to Reopen your case if you never received the notice of your hearing or exceptional circumstances, such as a serious illness, prevented you from attending. You can also ask ICE to delay removing you from the United States if you have a good reason to stay.
Posted by LEGiTiGO at 11:16 AM No comments: 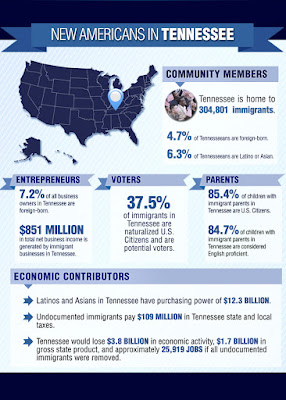 THE POLITICAL AND ECONOMIC POWER OF IMMIGRANTS, LATINOS,
AND ASIANS IN THE VOLUNTEER STATE

Immigrants, Latinos, and Asians account for large and growing shares
of the economy and population in Tennessee. Immigrants (the foreign-born)
make up roughly 4.7% of the state’s population, and more than
one-third of them are naturalized U.S. citizens who are eligible to vote.
Immigrants are essential to the state’s economy as workers, taxpayers,
and business owners. Moreover, Latinos and Asians (both foreign-born
and native-born) account for 1 in 16 Tennesseans and wield $12.3 billion
in consumer purchasing power. At last count, the sales and receipts of
businesses owned by Latinos and Asians totaled $5.4 billion and employed
more than 38,000 people. Immigrant, Latino, and Asian workers, consumers,
and entrepreneurs are integral to Tennessee’s economy and tax base—
and they are an electoral force with which every politician must reckon.

Immigrants and their children are growing shares of Tennessee’s
population and electorate.

in  2013—meaning that they are eligible to vote.

◾Unauthorized immigrants comprised roughly 2% of the state’s population
(or 130,000 people) in 2012, according to a report by the Pew Hispanic Center.

◾3% (or 94,902) of all registered voters in Tennessee are “New Americans”
—naturalized citizens or the U.S.-born children of immigrants who were raised
during the current era of immigration from Latin America and Asia which began
in 965—according to an analysis of 2012 Census Bureau data by the American
Immigration Council.

Posted by LEGiTiGO at 8:26 AM No comments: 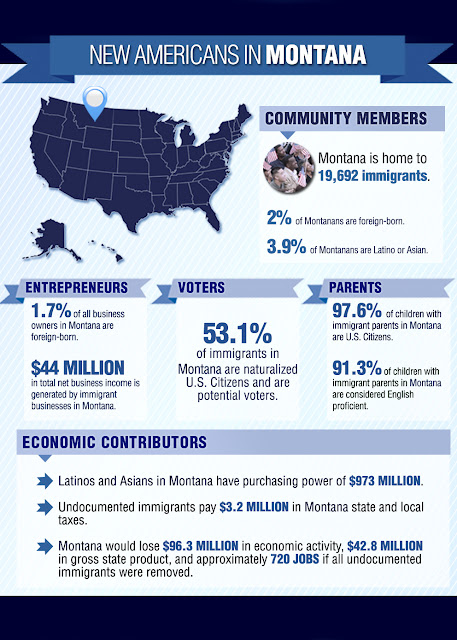 The Economic and Political Power of Immigrants, Latinos, and Asians in the Treasure State
Immigrants, Latinos, and Asians account for a significant share of the population and economy in Montana. Immigrants (the foreign-born) make up 2% of the state’s population, and almost half of them are naturalized U.S. citizens who are eligible to vote. “New Americans”—immigrants and the children of immigrants—account for 1.9% of registered voters in the state. Immigrants are not only important to the state’s economy as workers, but also account for tens of millions of dollars in tax revenue and consumer purchasing power. Moreover, Latinos and Asians (both foreign-born and native-born) wield $973 million in consumer purchasing power, and the businesses they own had sales and receipts of more than $300 million and employed more than 4,000 people at last count. As the economy continues to grow, Montana can ill-afford to alienate a significant component of its labor force, tax base, and business community.

The Economic Power of Immigrants, Latinos, and Asians in  the Buckeye State
Immigrants, Latinos, and Asians account for large and growing shares of the
economy and population in the electoral swing state of Ohio. Immigrants
(the foreign-born) make up 4.1% of the state’s population, and half of them are
naturalized U.S. citizens eligible to vote. “New Americans”—immigrants and the
children of immigrants—account for 4% of all registered voters in the state.
Latinos and Asians (both foreign-born and native-born) account for one in 20
Ohioans and wield nearly $19.6 billion in consumer purchasing power. At last
count, businesses owned by Latinos and Asians had sales and receipts of $9.1
billion and employed more than 63,000 people. Ohio is also home to the nation’s
second largest Somali population, whose many businesses contribute to the state’s
economy. As the economy continues to grow, Ohio can ill-afford to alienate such
an important component of its labor force, tax base, and business community.


Immigrants and their children are growing shares of Ohio’s population and electorate.