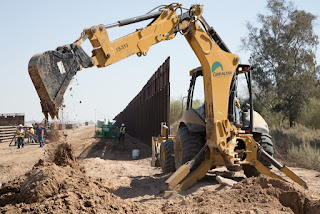 As the partial government shutdown stretches on, many individuals, families, and businesses around the country are struggling. At the heart of the shutdown and budget standoff is President Trump’s promise to “build the wall.” Yet for many people and businesses along the border, this is the last thing they want.

Ahead of President Trump’s visit to the U.S.-Mexico border last week, business owners and leaders spoke out against the president’s continued demand to build additional fencing along the border.
Business leaders in San Diego say that President Trump hyper-focusing on the wall is bad for the local economy and also an ineffective way to use taxpayer money, in part because the wall itself and the construction process can make it harder for people to cross the border at legal ports. With an estimated 90,000 northbound daily crossings at the San Ysidro port of entry, it is vital that business employees, customers, and goods or services can cross the border smoothly and efficiently.
Businesses and communities throughout the border region have long voiced concern about the border wall and militarization stifling cross-border commerce, literally creating barriers that cut into vital revenue and relationships.

According to Karim Bouris, executive director of Business for Good San Diego, San Ysidro businesses lost upwards of $5 million in November when the government closed the busy border crossing for several hours to install additional security barriers. In Santa Cruz County, California, businesses near the Tumacácori National Historical Park suffered when there were fewer visitors and tourists coming to the park from the Mexican side.

Posted by LEGiTiGO at 7:54 PM No comments: 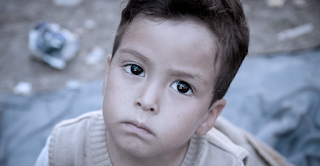 As One ‘Tent City’ for Immigrant Children Closes in Texas, Another Opens in Florida

Earlier this month, the Governments administration officially closed the doors of a “tent city” holding over 2,800 immigrant children in Tornillo, Texas. The closure comes after months of public pressure and local organizing. However, any celebration is short-lived. Just days after Tornillo’s closure, the administration announced its plan to increase bed space in another juvenile tent city in Homestead, Florida.

The tent city of Tornillo, about 35 miles from El Paso, Texas opened in November 2016. It later became a major point of controversy when it started being used to house an influx of unaccompanied minors and children who had been separated from their parents in the summer of 2018.

Since it opened, the Tornillo tent city experienced major pushback from the local community due to its military barracks-style conditions, as well as its limited access to medical and mental health care and educational opportunities for the children detained there.

Because Tornillo—and now Homestead—are classified as “emergency” or “influx” shelters, they skirt state child welfare guidelines. Although these sites are deemed “temporary,” the trauma and pain that the children suffer within these facilities is permanent. In “emergency” detention facilities, there are lower standards for staff vetting, training, youth education, and health, as they follow only a loose set of Health and Human Services guidelines.

Posted by LEGiTiGO at 8:59 PM No comments: 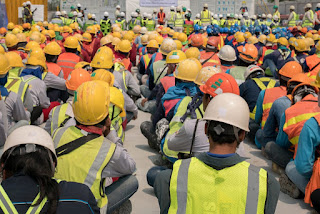 The Trump administration’s decision to end Temporary Protected Status (TPS) for migrants from several nations—including El Salvador, Honduras, and Haiti—has not only threatened over 300,000 long-term residents with deportation and separation from their families, but created potential workforce turmoil in multiple industries nationwide. The impending loss of workers will have ripple effects throughout local economies that are also deprived of their buying power and tax payments.

The largest of the impacted TPS populations consists of Salvadorans—tens of thousands of whom work in the construction, restaurant, and landscaping industries across the country.

Given that most TPS beneficiaries have lived in the United States for many years, construction companies will be losing more than just entry-level laborers. They will also be losing highly experienced workers. The net result will likely be a slow down of construction projects confronted by a sudden shortage of needed skills and labor. This is especially problematic for California and Texas, states hit with natural disasters in the last two years. 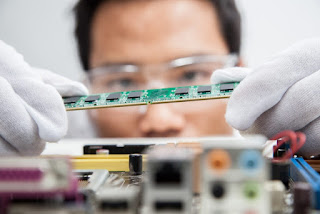 January 2 marked the final day for comments on a proposed rule by U.S. Citizenship and
Immigration Services (USCIS) that would implement a new registration requirement for H-1B visas for well-educated foreign professionals. This proposal would require employers looking to hire H-1B workers to first register electronically with the agency during a specified registration period

Hasty implementation of the proposal in 2019 could disrupt the Fiscal Year (FY) 2020 H-1B petition process and impose significant costs on employers  The proposed rule would also change how H-1B visa petitions are counted, likely restricting the ability of businesses to get the most qualified workers

The most obvious problem with the proposed registration system is that it is not yet functional, yet USCIS is counting on it being in place by April 1—which seems unlikely  Even if the system is up and running in time and performs as expected  it would still wreak havoc on the H-1B petition process

Companies have already devoted resources to petitioning for H-1B workers under the current system.

Having to then switch to a new system at the last minute would be costly, not to mention disruptive to businesses trying to hire the workers they need in a timely fashion. This would be particularly harmful to smaller businesses  which have fewer resources to switch gears in the middle of the petition process  But even big businesses could suffer from a crushing workload in a short span of time if they suddenly have to file multiple petitions under a new system only weeks before the FY 2020 H-1B season begins

Posted by LEGiTiGO at 7:56 PM No comments: