In yet another major blow to America’s asylum system, on Wednesday the Trump administration reportedly began sending some asylum seekers from Honduras and El Salvador to Guatemala rather than permit them to seek protection in the United States.

Under the “Asylum Cooperative Agreement” deal signed with Guatemala in July, the Guatemalan government will process the asylum claims of people who arrive at the U.S. border without visas.
For the first time in American history, large numbers of refugees can now be returned to a third country without their consent.

This denies them any opportunity to seek protection in the United States. Instead, people will be required to apply for asylum in Guatemala, a country with one of the highest rates of poverty and malnutrition in the entire Western Hemisphere.

The new agreement went into effect on Tuesday. Under the new rules put in place to implement the agreement, there is only one way individuals can avoid getting sent to Guatemala. They must prove to an asylum officer that it is “more likely than not” they will be persecuted or tortured in Guatemala.

This is a high, likely unreachable bar for people locked in detention with no access to lawyers as well as those first arriving at the border.

The agreement with Guatemala is sweeping. It applies to any person who enters the United States without a visa or permission to enter, regardless of whether they ask for asylum at a port of entry or after crossing the border.

There is also nothing in the agreement that limits it to people who have first traveled through Guatemala on their way to the United States. This raises fears that the agreement could be applied against Mexicans too. 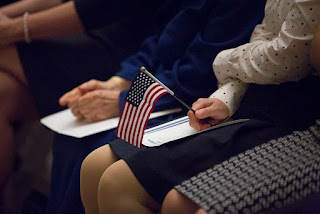 The cost of filing an application for citizenship—usually a hefty $725—has long been a barrier for some immigrants. Now, a change to the naturalization process may leave even more people priced out of becoming a U.S. citizen.

U.S. Citizenship and Immigration Services (USCIS) recently announced a new policy that will change how the agency determines eligibility for a waiver of its application fees. It is set to go into effect December 2.

The policy will narrow the fee waiver eligibility for those applying for citizenship, green cards in certain categories, work permits, and other immigration benefits.

The new policy will eliminate the means-tested benefit from the eligibility criteria.
Under the change, people may only request a fee waiver if they can prove their annual household income is at or below 150% of the Federal Poverty Guidelines or if they can demonstrate financial hardship by some other means.

The two remaining alternatives are more difficult to prove. They require substantial documentation and often the help of an attorney. Sifting through this documentation would likely be more time-consuming for an already overburdened USCIS, creating even greater backlogs.

Posted by LEGiTiGO at 9:17 PM No comments: