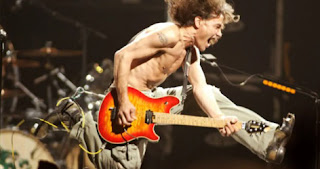 Music fans around the world are mourning the loss of iconic Van Halen rock star Eddie Van Halen. And while many today honor his legacy as one of the all-time greatest guitarists, fans are also highlighting past interviews describing his encounters with painful racism and discrimination because of his mixed race in his early years.

Van Halen, who died of throat cancer at 65, was the son of Dutch and Indonesian immigrants and spent his childhood in the Netherlands. His former bandmate David Lee Roth, a fellow rock superstar, once revealed on the podcast "WTF with Marc Maron" just how painful the experience was for the young Van Halen and his brother, drummer Alex Van Halen.

In the 2019 interview, Roth described how poorly the Van Halens' parents were treated because of their mixed-race relationship in the 1950s.

"It was a big deal. Those homeboys grew up in a horrifying racist environment to where they actually had to leave the country," Roth said in the podcast.

He added that the brothers, who were often referred to as "half-breed" in the Netherlands, still met difficult circumstances after immigrating to the U.S.

"Then they came to America and did not speak English as a first language in the early '60s. Wow," Roth told Maron. "So that kind of sparking, that kind of stuff, that runs deep."

The brothers' mother, Eugenia, met their father, Jan, a traveling musician, in Indonesia when it was under Dutch rule. Shortly after World War II, the couple decided to move to the Netherlands, where the rock stars were born.