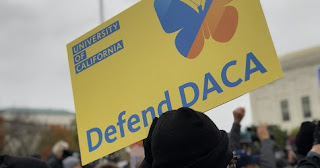 A Judge Fully Reinstated DACA, but Dreamers Are Still in Danger

A federal judge in New York has overturned the Trump administration’s latest effort to limit the Deferred Action for Childhood Arrivals (DACA) initiative.

DACA temporarily protects certain people without immigration status from deportation and provides them with a work permit. The Trump administration’s previous effort to end the initiative altogether was rejected by the U.S. Supreme Court. DHS responded by attempting to severely limit participation in the initiative, which the court in New York rejected. The latest decision means that starting December 7, hundreds of thousands of people should be able to apply for DACA for the first time.

In 2012, after years of pressure from immigrant youth, the Obama administration implemented DACA through executive action. Applicants must meet certain age, physical presence, and academic requirements to qualify, in addition to passing a criminal background check.

In 2017, the Trump administration attempted to terminate DACA, claiming it was illegal. Lawsuits forced the government to continue granting renewals from people already enrolled, but the administration was allowed to refuse any new applications.

In June 2020, the Supreme Court found that the Department of Homeland Security (DHS) did not adequately explain its decision to end DACA and its reasoning to do so was faulty. However, the Court left the door open to the Trump administration ending DACA so long as it did so properly.

Following that decision, U.S. Citizenship and Immigration Services (USCIS) should have—but did not—start accepting first-time applications after the Supreme Court decision. In July, DHS instead issued a memo severely limiting DACA. The memo excluded first-time applicants, required renewal annually instead of every two years, and eliminated most advanced parole, a procedure that let DACA recipients travel outside of the country.