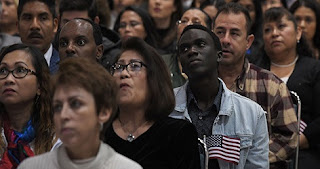 What Is the Proper Term: Illegal or Undocumented Immigrant?

When someone resides in the United States without having filled out the requisite immigration paperwork, that person has immigrated to the United States illegally. So why is it preferable to not use the term "illegal immigrant"?

"Illegal" is uselessly vague. ("You're under arrest." "What's the charge?" "You did something illegal.")

"Illegal immigrant" is dehumanizing. Murderers, rapists, and child molesters are all legal persons who have committed illegal acts; but an otherwise law-abiding resident who doesn't have immigration paperwork is defined as an illegal person. This disparity should offend everyone on its own merits, but there's also a legal, constitutional problem with defining someone as an illegal person.

It's contrary to the Fourteenth Amendment, which affirms that neither the federal government nor state governments may "deny to any person within its jurisdiction the equal protection of the laws." An undocumented immigrant has violated immigration requirements, but is still a legal person under the law, as is anyone under the jurisdiction of the law. The equal protection clause was written to prevent state governments from defining any human being as anything less than a legal person.

On the other hand, "undocumented immigrant" is a very useful phrase. Why? Because it clearly states the offense in question: An undocumented immigrant is someone who resides in a country without proper documentation. The relative legality of this act may vary from country to country, but the nature of the offense (to whatever extent it is an offense) is made clear.