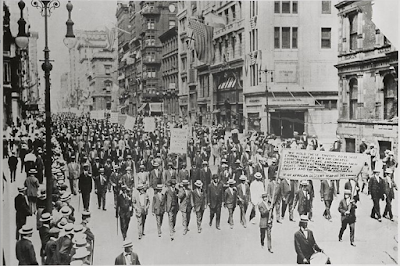 
The Negro Silent Protest Parade was a silent march of about 10,000 African Americans along Fifth Avenue starting at 57th Street in New York City on July 28, 1917. The event was organized by the NAACP, church, and community leaders to protest violence directed towards African Americans, such as recent lynchings in Waco and Memphis. The parade was precipitated by the East St. Louis riots in May and July 1917 where at least 40 black people were killed by white mobs who had been whipped into a frenzy by labor unions in order to resist strike breaking efforts.

Prior to May of 1917, there began a migration of blacks, fleeing threats to life and liberty in the South. Tensions in East St. Louis, Illinois were brewing between white and black workers. Many black workers had found work in the local industry, leading white workers to fear for job security, and wage security, due to this new competition. The situation exploded after rumors of black men and white women fraternizing. Thousands of white men descended on East St. Louis, and began attacking African Americans. They destroyed buildings, and beat people. The rioting died down, only to rise with vigor again several weeks later. After an incident in which a police officer was shot by black residents of the city, thousands of whites marched and rioted in the city again. The Encyclopedia of the Harlem Rennaissance states that "Eyewitnesses likened the mob to a manhunt, describing how rioters sought out blacks to beat, mutilate, stab, shoot, hang, and burn."

The brutality of the attacks by mobs of white people and the refusal by the authorities to protect innocent lives contributed to the responsive measures taken by some African Americans in St. Louis and the nation. Marcus Garvey declared in a speech that the riot was "one of the bloodiest outrages against mankind" and a "wholesale massacre of our people", insisting that "This is no time for fine words, but a time to lift one's voice against the savagery of a people who claim to be the dispensers of democracy." Many black people, after the riots, felt that there was little "possibility of the United States ever permitting black people to enjoy full citizenship, equal rights and dignity."
Writers and civil rights activists, W.E.B DuBois and Martha Gruening visited the city after the riot on July 2 in order to speak to witnesses and survivors. They wrote an essay describing the riots in "gruesome detail" for The Crisis, an NAACP publication. 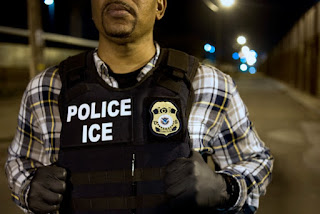 The head of the Immigration and Customs Enforcement unit in charge of deportations has directed his officers to take action against all undocumented immigrants they may cross paths with, regardless of criminal histories. The guidance appears to go beyond the Trump administration’s publicly stated aims, and some advocates say may explain a marked increase in immigration arrests.

In a February memo, Matthew Albence, a career official who heads the Enforcement and Removal Operations division of ICE, informed his 5,700 deportation officers that, “effective immediately, ERO officers will take enforcement action against all removable aliens encountered in the course of their duties.”

The Trump administration, including Homeland Security Secretary John Kelly, has been clear in promising to ramp up immigration enforcement, but has so far emphasized that its priority was deporting immigrants who posed a public safety threat. Indeed, Kelly, to whom Albence ultimately reports, had seemed to suggest a degree of discretion when he told the agencies under his command earlier this year that immigration officers “may” initiate enforcement actions against any undocumented person they encountered. That guidance was issued just a day before Albence sent the memo to his staff.

A spokesman with ICE said Albence’s directive did not represent a break with Kelly’s stated aims, and was consistent with current agency policies.

“The memo directly supports the directions handed down in the executive orders and mirrors the language ICE consistently uses to describe its enforcement posture,” the spokeswoman, Sarah Rodriguez, said in a statement. “As Secretary Kelly and Acting Director [of ICE] Homan have stated repeatedly, ICE prioritizes the arrest and removal of national security and public safety threats; however, no class or category of alien in the United States is exempt from arrest or removal.” 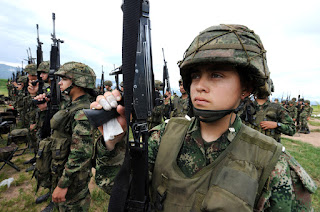 Pentagon May Deport Immigrants Who Have Served in the Military

The Pentagon is considering halting a program that allows immigrants with urgently needed skills to serve in the military, putting the thousands of soldiers promised expedited citizenship in exchange for their service at risk for deportation.

According to an undated Defense Department memo, the Pentagon may terminate the Military Accessions Vital to National Interest program (MAVNI), an initiative that has allowed noncitizens with specialized linguistic and medical skills to enlist in the military and receive fast-tracked citizenship.

Since the program’s launch in 2009, these immigrant troops have filled in the gaps for jobs deemed critical to the military’s operation, but are in short supply in American-born troops.

The memo, however, cites the “potential threat” posed by these immigrant troops, referencing their “higher risk of connections to Foreign Intelligence Services.” Officials have now assigned threat level tiers to the 10,000 troops in the MAVNI program—the majority of whom serve in the Army—despite the rigorous vetting they endured to enter the military in the first place.

Attorney and Retired Lieutenant Coronel Margaret Stock, the founder of the MAVNI program, told NPR that these security concerns were exaggerated: “If you were a bad guy who wanted to infiltrate the Army, you wouldn’t risk the many levels of vetting required in this program.”

Other immigrants would not even be able to reach basic training—ending the MAVNI program would also cancel the contracts of recruits in the delay-entry program, a holding pool of recruits awaiting their assigned training date.

As a result, 1,800 enlistment contracts for immigrant recruits would be cancelled, putting roughly 1,000 at risk for deportation. Those recruits’ visas expired while waiting for the military’s travel orders. An additional 2,400 part-time troops would also be removed from service.

Posted by LEGiTiGO at 4:53 PM No comments: 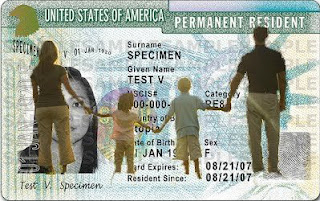 The procedure for applying for U.S. permanent residence (a "green card") while living in the United States. Applicants submit a written application and later attend an interview at a local USCIS (U.S.
Citizenship and Immigration Services) office.

Adjustment of status is available only to certain people. Not only does the immigrant have to be eligible for a green card in the first place, he or she must also (with some exceptions), be staying in the U.S. legally, with a visa or other status.

If you have applied for a green card within the United States through the procedure known as "adjustment of status," you are likely, as the last step in your application process, to be called in for an interview by U.S. Citizenship and Immigration Services (USCIS).

How long does it take to apply for adjustment of status?

If you have any questions regarding Adjustment of Status or any other immigration topic,
Please contact LEGiTiGO, today 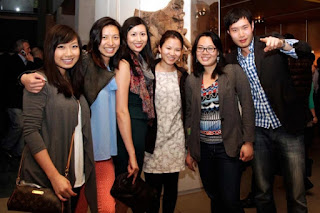 Asian Immigrants Want to Be US Citizens

The naturalization process, which allows qualified new Americans to be able to vote, takes an average of six months to complete. It also offers a US passport and the chance to hold elected office in most counties and states in the US.

Department of Homeland Security data suggests that there has been a steady increase in applications in recent decades, with the country’s highest rates of naturalization belonging to Asian Americans. In 2015, of the 730,259 new naturalizations, as many as 261,374 new Americans were Asian Americans.

The clinics are part of a national initiative, known as the New Americans campaign, which is intended to aid community groups to reach a wide number of immigrants and help in the naturalization of as many as possible. It is funded by various foundations. To gain citizenship, immigrants need to have a green card allowing them to have worked and lived in the US on a permanent basis for five years.

Many immigrants do not apply to gain citizenship. According to the Department of Homeland Security, eight million immigrants were eligible to apply for US citizenship in 2013, but only a small fraction did so.

If you have any questions regarding Citizenship or any other immigration topic,
Please contact LEGiTiGO, today