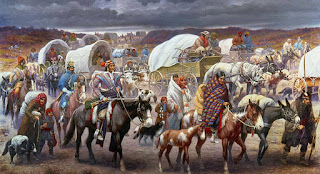 Trump says that he would deport all undocumented immigrants in the United States,
an estimated 11 million people. American cities and counties in the Southwest and
Midwest tried to expel Mexican-Americans once before in the 1930s, with traumatic
results for the families affected. But perhaps an even more illuminating comparison
is with the mass deportation that the United States sponsored a hundred years
earlier, in the 1830s.

In that decade, the federal government uprooted some 80,000
Native Americans from their homes and forced them west of the Mississippi, into
what is now Oklahoma. It was a humanitarian disaster and remains one of the most
shameful episodes in the country’s history. Though few if any Americans are proud
of The Trail of Tears, as the Cherokees call their harrowing expulsion from
the Southeast and deadly journey westward, there are some obvious differences between undocumented immigrants today and native peoples in the early 1830s. For one, American Indians had been living in what is now the United States since
“time immemorial,” as many people observed in the era,
whereas undocumented immigrants are recent arrivals...
learn more at www.legitigo4u.tk